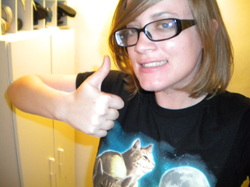 As an illustrator I love creating worlds and characters and sharing my world with others. I’m inspired by the creative minds of Maurice Sendak, Dr. Suess, Bill Watterson, and Shel Silverstein who sparked my imagination to create. I make both digital and traditional pieces through  storyboards, comics, and Illustrations.

My main tools I use are markers, inks, watercolors, and programs such as Photoshop and Illustrator.  I also have a background in sequential arts with comic work in IDW’s Womanthology Sketchbook with the story Tea Totaler, guest strips and pinups for other comic creators, and creating my own comics with NB Studios. My comic background helps me understand how to tell a story visually and gives me experience with deadlines and collaborating with others.  My pieces open a window into my imagination and will introduce you to new characters and places to discover.

I currently am completing my BA in digital Arts at the University of Tampa and travel across the US selling my art at comic book conventions with my boyfriend Josh Dykstra.